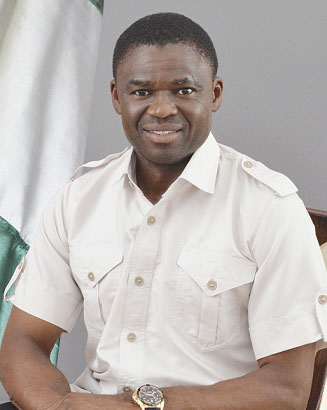 Rt. Hon. Comrade Philip Shaibu was born on 1st December, 1969 in Kaduna State into the family of Mr. and Mrs. Francis Shaibu of blessed memory, who were both Pastor and Teacher respectively.

He is a native of Jattu in Uzairue in Etsako West Local Government Area of Edo State.  He is the first child of his parents.

Upon completion of his primary school education, he moved on to Sardauna Memorial Secondary School, Kawo, Kaduna State where he sat for his West African Certificate Examinations and obtained his certificate.

At the completion of his secondary school education, he gained admission into the prestigious University of Jos (UNIJOS), Plateau State where he bagged a Bachelor of Science Degree in Accounting (B. Sc.). His quest for further education took him to the University of Benin, (UNIBEN) where he obtained a Master’s Degree (M. BA.) in Business Administration. He has attended several courses and training within and outside the shores of Nigeria.

The man, Rt. Hon. Comrade Philip Shaibu is a husband and a father. He is happily married to Comrade (Mrs.) Maryann Philip-Shaibu whom herself was Vice President of Auchi Polytechnic Students’ Union; a Certified National Accountant; a Member of Association of National Accountants of Nigeria (A.N.A.N) and rose through the rank and file of the National Assembly Service Commission (N.A.S.C). They are both blessed with four children.

The man, Rt.Hon. Comrade Philip Shaibu is an ardent, convinced and devout Catholic Christian. He is a devotee of the Divine Mercy, a member of St. John Society and Catholic Men Organization (CMO). As a man of unshakable faith in God, he has his family enshrined in the Sacred Heart of Jesus and Immaculate Heart of Mary.

The man Comrade Philip Shaibu is a God-fearing, an astute, dogged, a lover of democracy, courageous and people oriented Politician. For this he was convinced enough alongside with some to stick his neck out to speak against juntas and bad governance wherever they existed. No matter how much of threats he gets and with what he is threatened with, he can never be gagged. These rear and uncommon qualities in a young Activist have earned him a place in Gashua Prisons and DSS detention center in Jos alongside General Diya and other Military personnel alleged of plotting coup against General Abacha and for daring to challenge the brutal regime of some juntas.

The man, Rt. Hon. Comrade Philip Shaibu is not just a nominal figure in the democratic process of our dear nation but a force to be reckoned with. This man, Comrade Philip Shaibu alongside with great men in Nigeria like one time President of Nigeria Labour Congress (N.L.C) our very own Comrade Adams Aliyu Oshiomhole, Chief Gani Fawehinmi, Dr. Beko Ransome-Kuti at various and separate times fought and pulled down fascism in Nigeria and paved way for the smooth return of democracy that has come to stay.

Rt. Hon. Comrade Philip Shaibu, the man of the moment is a member of the National Working Committee of the All Progressives Congress (APC), a reliable and dependable loyalist, an unwavering Politician, a team player, a defender of equity and justice, a noble son of Edo State has carved a niche for himself in the political history of our beloved Country and State.

To the greater glory of God and for the continuity of good governance in Edo State, I hereby present to this august assembly, the Rt. Hon. Comrade Philip Shaibu, the Deputy Governor-Elect of Edo State. May we kindly request that he steps forward to take his Oath of Office.

He fought for democracy in this country, putting his life on the line several times. He was arrested severally and was detained without trial during the regime of IBB and ABACHA in Lagos and Ile-Ife.

Comrade Philip Shaibu worked with the Nigerian Prison Service, Abuja and retired voluntarily as an Assistant Inspector of Prisons. Upon retirement, he delved into business which he skillfully combined with his political ambition.

Rt. Hon. Comrade Philip Shaibu’s political journey started way back in the middle nineties when he was elected into the University of Jos Students’ Union Government Parliament (S.U.G) to represent Abuja Hostel and the National Association of Nigerian Students (N.A.N.S) Zone C as Coordinator for “Abacha Must Go.”

In 1997, he rose to become the Welfare Secretary in the Students’ Union Government, University of Jos and in 2000 became the President of National Association of Nigerian Students.

Having served faithfully at students’ level, he entrenched himself further into the broader political scene and in 2003 vied for a seat in the Edo State House of Assembly and contested the elections under the political platform of the All Nigerian Peoples Party (A.N.P.P) which he lost.

His option for equity, political emancipation, all-round development and freedom from bad governance made him again in 2007 to contest for the House of Assembly seat under the auspices of Action Congress (A.C) now All Progressives Congress (A.P.C). A seat he won gallantly to be the representation of the good people of Etsako West Constituency II.

After being the good representation of his Constituents in the House for the first term, he was again nominated, voted for and re-elected in 2011 to remain the fulcrum of the good people of his constituency in the House of Assembly.

As a worthy son and representation, a fearless and dogged Politician, one who had washed his hands clean and was perceived to be ready to eat with elders, his Constituents voted and elected him in 2015 as their Representative at the National Assembly to speak for the good people of Etsako West, East and Central Federal Constituency under the platform of All Progressives Congress (A.P.C).

Rt. Hon. Philip Shaibu’s political journey can neither be complete without mentioning his recorded achievements nor his leadership positions meaningful if his constituency projects are not humbly put before the good people of Edo State for whom he has been called to serve and with whom he has so slaved for their all-round development.

As students’ leader he zealously and courageously led his team to work for the general improvement of students’ welfare. He saw to it that:

(2) he engaged the Federal Government under former President Olusegun Obasanjo to re-instate the Four Hundred and Eighty-Six (486) students who were rusticated during the despotic rule of General Abacha and indeed they were re-instated;

(4) he showed remarkable resilience as a fearless student leader in conjunction with Nigeria Labour Congress (N.L.C) under the dynamic leadership of Comrade Adams Aliyu Oshiomhole to kick against and reject the unfriendly hike in fuel price at the then “Mother of all rallies”;

(5) his power of engagement brought to birth the establishment of Coca-Cola villages in most of the tertiary institutions;

(6) his enviable sense of team work made it possible for him to work with the leadership of National Youth Council of Nigeria to birth the first ever National Youth Policy and;

(7) he labored and critically engaged Federal Government on the Financial Autonomy Policy of Federal Institutions which saw it repealed eventually.

Rt. Hon. Comrade Philip Shaibu has turned political representation around for good such that the blind can see constituency projects come to reality and are factual. He has birthed so far Forty Five (45) Constituency Projects. One striking phenomenon about him is the fact that his democratic presence and representation are visible, felt and known in all the twenty nine (29) communities of Etsako West Constituency II. With him all his Constituents know and appreciate what constituency projects are all about. No wonder then he was christened “Mr. Constituency Projects.” Some of the projects to his credit and benevolence to his constituents and beyond include:

(1) The construction of an ultra-modern market in Jattu;

(2) the construction of twenty-three (23) blocks of three classrooms each with Headmaster’s Office;

(3) the construction of four (4) blocks of four classrooms each with Principal’s office;

(4) the provision and installation of transformers to seven (7) communities with his constituency;

(5) the full extension of electricity to Apana community and provision of complete insulators to the community;

(6) Full education scholarship to indigent students many of whom are graduates now living happily within and outside the shores of Nigeria and many still in schools;

(7) Empowering hundreds of men and women by training them on National Directorate of Employment (NDE) and the provisions of necessary tools to change, enhance and better their living and;

As member of the Edo State House of Assembly and House of Representatives in the National Assembly, Comrade Philip Shaibu has moved One Hundred and Six (106) motions, sponsored Thirty Six (36) Bills and moved Twelve (12) motions respectively. Notable among these are:

(1) The Child Rights Law and the Land Use Charge Law;

(2) The Act abrogating the unpopular electricity “Fixed Charges” imposed on electricity consumers and;

Worthy of note here is the fact that Comrade Philip Shaibu, “Mr. Constituency Projects” successfully ensured that ten (10) Federal constituency projects were included in the 2016 Budget.

He started life in Lagos then went on to kano. He then left kano for Kaduna due to MATASINI riot and left KADUNA for LAGOS when he could not secure admission into NIGERIA DEFENCE ACADEMY (NDA).
On Arrival in Lagos, as a focused and hard-working young man joined the HAUSA boys to offload (goods) for some traders. He started his Chemical Business in 1985. He rented his first shop with N70 that grown to be a big employer of Labour. He became one of the big names in Chemical business in Nigeria. He is the Pioneer General Secretary of OJOTA CHEMICAL DEALERS UNION and the pioneer PRESIDENT of ALMANGAMATED CHEMICAL DEALERS UNION OF NIGERIA.

HE is a business man, He is the Chairman of Akhigbe Osi Industries Limited, Akhis Oil and Gas Limited and Patrajos Global Company Limited, with a subsidiary in car hire services (CITY TRAVELS AND TOURS) aka CITY CARS.

He was appointed Senior Special Assistant on Protocol matters to the Governor in 2008 by the Comrade Governor, a position he held for 4 years. He was further elevated owing to his dedication and responsiveness to duties as the EXECUTIVE DIRECTOR ON PROTOCOL MATTERS to Governor Adams Aliu Oshiomhole.

He has served in various committees set by the State Government and he discharged his responsibility very well to the admiration of others.

“The golden fish has no hiding place” they say.  This is the case with Comrade Philip Shaibu hence in 2011 at the Fifth Assembly he remained the House Majority Leader and the Chairman of House Committee on Rules, Business and Government House.  These positions he held up until 2015 when his term in office expired.

His faithfulness to duty and the servant-leadership representation he has shown over the years which endeared him to many, made the good people of Edo State on 28th September, 2016 elected him, the Rt. Hon. Comrade Philip Shaibu as their Deputy Governor-Elect.