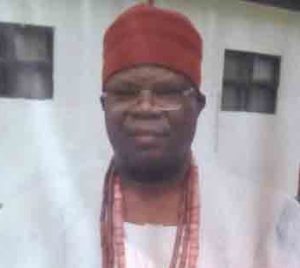 His Royal Highness Dr. George Oshiapi Egabor, Justice of Peace (JP) Ambassador of Peace (AMB, P) Traditional Ruler, Officer of the Order of the Niger (OON), Industrialist, Professional Accountant, Chartered Secretary and Administrator, Management Expert, Philanthropist and an Academic, was born on 26th August, 1942, in Emokweme Quarters of Agenebode, into the well-known Egabor Family in Uwanno Kingdom. His father the late Chief Oshiapi Egabor was a farmer: a village Head, and a tax collector. His late mother Madam Ijenebu Egabor was also a farmer and a well-known trader.

The Senior Egabor was such a vocal and articulate person who was very interested in Western Education but never had the opportunity of going to School. He was however very intelligent that the then Western Nigeria Government through the Local Authority in Auchi appointed him a tax collector for his community, a position which brought him a lot of fame and influence in the society.

This future King who then was in the Primary School, served his father as his tax clerk, a position, which one can easily say first exposed him to the principles of book-keeping, and accountancy, a profession in which he has today distinguished himself. As was to be expected, his father never hesitated in encouraging him to embrace Western Education by enrolling him in the then St. Thomas Secondary Modern School (now St. Peter’s Grammar School) for further Education pursuit. Dr. Egabor loved going to the farm to help out in tilling the soil and sowing crops as a young person. He also loved fishing expeditions which he participated in vigorously with his childhood friends, some of whom are still alive.

His Royal Highness was admitted into the Native Authority School, which later became the Local Authority Primary School, Emokweme between 1950 and 1957. On completing his Primary School Education, his father sent him to St. Thomas’s Secondary Modern School now St. Peter’s Grammar School, Agenebode from 1958 – 1962.

Having been introduced to the benefits of Education from the performance of his Secondary School teachers, this brilliant Monarch was desirous of acquiring more training and so he decided to embark on private correspondence studies with various Overseas Educational Institutions and Renowned Professional Bodies of Word Recognition. He did his courses with:

In his quest for knowledge in the highest level of Education, His Royal Highness Dr. George Oshiapi Egabor pursued his Post Graduate Studies in Management with St. Clements University Southern Australia and obtained a Doctorate Degree and Management. Before ascending the throne, he had specialized in delivering lectures at various places and professional topics that relate to Accountancy, Management and Small and Medium Scale Enterprises.

Dr. George Egabor holds the fellowship of several professional bodies amongst which are the following:

He has attended various management-training programs locally and abroad and has acquired the membership of various professional Management bodies among which are the following;

Dr. Egabor has delivered papers at various conferences and workshops on Management Subjects especially in the areas of his specialization, which is Small and Medium Enterprises (SME) Development and Management.

His Royal Highness Dr. George Oshiapi Egabor was appointed Justice of Peace by the Edo State Government in 1994 and he is the recipient of several Chieftaincy Titles before being appointed the Traditional Ruler of Uwanno Kingdom in Etsako East Local Government Area of Edo State in August, 2002. He is also a recipient of Men of Achievement Award in Business and several other Awards. A past Patron of the Accounting Students Association of the University of Lagos, he is also a Patron of several Social and Cultural bodies. He is presently the grand Patron of Joint Faith Peace Initiative and an Honorary citizen of the State of Georgia in the United States of America (U.S.A.) since 2005. He was given the key to the city of Easton also in U.S.A. in 2005, this is a pointer to a clear fact that Dr. Egabor has travelled far and wide and to most of the civilized Countries in the world and has seen civilization and development in their real nature. He also was appointed an Ambassador of Peace of the United Nations in December, 2014.

His Royal Highness Dr. George Oshiapi Egabor joined complete Home Enterprises Limited, a Civil Engineering Construction Company in 1968 as Accountant. In 1971, he joined Pharchem Industries Limited, a Pharmaceutical Manufacturing Company as Secretary/ Accountant and was subsequently promoted to the post of Company Secretary/ Finance Director in 1977. He ultimately became the Chairman and Chief Executive Officer of the Company since he became a Traditional Ruler.

An outspoken and intelligent Traditional Ruler, Dr. Egabor quickly infected the Edo State Government with his bundle of experience and intellectual ability on his ascension to the throne. It was no wonder then that the Edo State Government found him useful in various areas to assist in promoting Government activities. He was made a member of the Governing Council of Edo State Institute of Technology and Management. Usen from 2004 to 2007. He was also appointed the Chairman of the Government Committee, which looked into and helped to resolve the communal crisis in Iyuku and Imeke Communities in Uzairue Kingdom in 2006.

In continuation of the utilization of his wealth of experience, he was appointed the Chairman of the Governing Council of the College of Education. Ekiadolor, Benin City from July 2007 to November, 2008 where he also Chaired the various statutory committees. He actually brought succor to the College and raised it a step further in its status. For this reason, the College conferred on him an Award of excellence for his good works in the College of Education as Chairman of the Governing Council. A former (ANAN), Dr. Egabor also served as a Chairman of its membership committee for over five years, and he is also a member of the Edo State Council of Traditional Rulers and Chiefs.

A great family man, sartorial and urbane, His Royal Highness Dr. George Oshiapi Egabor is an accomplished crises manager and team player. Since becoming the Traditional Ruler of Weppa Wanno Kingdom, all the outstanding disputes between individual and within communities have been successfully resolved. He has continued to resolve all disputes and crisis within his Kingdom through his straight forward decisions and his desire to ensure that the weak in the society is not oppressed.

Dr. Egabor has attracted many meaningful amenities to the Kingdom through his selfless services to his people. He has been able to place himself in the position of Redeemer of his people by taking them out of the doldrums to the light of the development when he influenced and attracted to the Kingdom the following amenities which were not there before his ascension.

He has also extended philanthropic gestures towards other religious organizations in the Kingdom.

As a lover of Education, he has assisted many sons and daughters of Uwanno Kingdom to secure admissions into various higher institutions of learning and he has not relented in his efforts to see that our sons and daughters who are well placed should assist the growing ones to place them where they can be useful to themselves and to the Kingdom.

Considering all his performance since his ascension to the throne in 2002 and discovering that he is a man of the people in spite of his paramount position as a Traditional Ruler, he was once again honored with the National Award of the OFFICER OF THE ORDER OF THE (OON) in 2011 by His Excellency Dr. Goodluck Ebele Jonathan GCFR, President and Commander- in-Chief of the Armed forces of the Federal Republic of Nigeria on 14th November, 2011.

Dr. Egabor served as the Pro-Chancellor and Chairman of the Governing Council of Usman Dan Fodio Federal University Sokoto, in Sokoto State, from 2013 to 2016 and a member of the Committee of Pro-Chancellors and Chairmen of Governing Councils of Federal Universities in Nigeria during the same period. This is an honor and a position given to him by the President and Commander in Chief of the Armed Forces of the Federal Republic of Nigeria to be one of those to donate their wealth of experience for the governance of the Country. On 13th December, 2014, this man of destiny was once again honored, by the United Nations Organization (UNO) with appointment as AMBASSADOR OF PEACE in recognition of his various peace Projects in Nigeria and as a well-known Traditional Ruler of his people and was recently appointed the Chancellor of ANAN UNIVERSITY JOS PLATEAU STATE.

This Traditional Ruler whose rulership style is envied by many non-Weppa Wanno people is happily married with children.