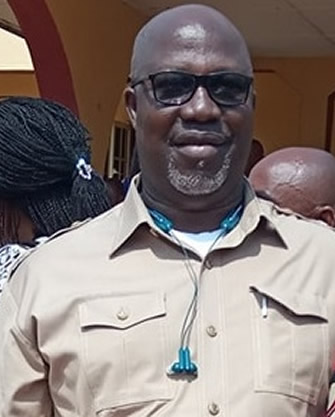 His father, Late CHIEF AKHIGBE OGHIENENI KADIRI was one of the most respected and admirable Community Leader and a renowned farmer while the mother Late MRS AKHIGBE LAMI PATTY was a well known successful Trader. Comrade John Osi Akhigbe popularly known and called AKPOGU is from a humble background, he is married to his beautiful queen MRS AKHIGBE ABOKHAISOMHI CLEOPATRA and they are blessed with two (2) beautiful Children EMMANUELLA JOHN OSI AKHIGBE and JOHNKING JOHN OSI AKHIGBE.

He is a devout Catholic and a member of the Catholic Youth Organization of Nigeria (CYON) and a past President of this youth body, he is also a member of Catholic Charismatic Renewal of Nigeria (CCRN). He loves the work of God.

He is a devout Catholic and a member of the Catholic Youth Organization of Nigeria (CYON) and a past President of this youth body, he is also a member of Catholic Charismatic Renewal of Nigeria (CCRN). He loves the work of God.

He is a well known Philanthropist, himself being an ORPHAN, he is presently taking care of over 18 Orphans in Mathan Orphanage Home in Iraokhor Village in Estako Central local Government Area of Edo State. Owing to his love for humanity, He renovated their houses and equipped it with modern facilities coupled with constant provision for their up keep.
Comrade John Osi Akhigbe popularly known as AKPOGU is a man with a big heart for the widows and the needy in our Society. This he expresses through the payments of hospital bills for the sick, scholarship to indigent students and the Less-privilege in the Society amidst others. He is humble, hardworking, fearless and an advocate of good leadership in our Society.
He is presently training Four Medical students; one in AMBROSE ALI UNIVERSITY EKPOMA and the others in UNIBEN. He is also contributing to the education of over ninety (90) students in various Higher Institutions in Nigeria.

He has received several awards from various groups which include the following:

Honorary award in recognition of his service to humanity.

Etsako Students’Union, UBTH chapter presented him with an award of excellence leadership in 2012

Etsako Students’Union, Auchi Polytecnic chapter , presented him with a humanitarian service award in recognition of his selfless service for the less priveledge in the society on the 6th of August 2014.

Science Education Students Association, UNIBEN chapter gave him an award of honour in recognition of his commitment to duty
Genesis International presented him an award of Excellence in appreciation for the contribution towards humanity.

Kukuruku Youth Renaissance Network presented him a certificate of recognition and commendation as the most distinguished politician in Nigeria on 30th December, 2014.

National Etsako Students’Union, presented him with an award of Excellent leadership in recognition of his exceptional contribution to the human development and youth empowerment on june 3rd, 2013.

Etsako Students’Union, UBTH presented him with an award of Ambassador of Goodness in Recognition of his contribution to building human capacity in developing education and peace from the 2015/2016 exco.

National Association of Edo State Students, Obafemi Awolowo Chapter presented him award of Outstanding contribution in recognition of his selfless service and loyalty beyond call of duty for the development of the youths in Edo State on March 8th 2010.

Final year Medical (Dental) Students, UNIBEN presented him with an award of Excellence in recognition of outstanding leadership through selfless service and youth advocacy on 4th November 2011.

Catholic Youth organization of Nigeria, St. Agnes Catholic Church, Maryland, Lagos presented him with a meritorious award recognizing his outstanding contribution and commitment towards the growth of the organization on December 9th 2012.

Board of Lectors, St Paul Catholic church, Airport road Benin City, Catholic Archdiocese of Benin awarded him a certificate of Merit to certify he was a distinguished patron of Board of Lectors at the Catholic Church on the 24th of july, 2016.

Catholic Youth organization of Nigeria, St Paul Catholic church benin city, Edo State awarded him with a certificate of honour as a Patron in Recognition of his immense support towards the organization on june 24th, 2016.

He had his Primary Education at Obe Primary School, Fugar, his Secondary Education at Saint John’s College Fugar and Tertiary Education at the Prestigious Polytechnic of Ife, from where he graduated as an Accountant. He has attended several Leadership courses, Seminars, Conferences and Workshops in various fields within and outside the Country.

He fought for democracy in this country, putting his life on the line several times. He was arrested severally and was detained without trial during the regime of IBB and ABACHA in Lagos and Ile-Ife.

He started life in Lagos then went on to kano. He then left kano for Kaduna due to MATASINI riot and left KADUNA for LAGOS when he could not secure admission into NIGERIA DEFENCE ACADEMY (NDA).
On Arrival in Lagos, as a focused and hard-working young man joined the HAUSA boys to offload (goods) for some traders. He started his Chemical Business in 1985. He rented his first shop with N70 that grown to be a big employer of Labour. He became one of the big names in Chemical business in Nigeria. He is the Pioneer General Secretary of OJOTA CHEMICAL DEALERS UNION and the pioneer PRESIDENT of ALMANGAMATED CHEMICAL DEALERS UNION OF NIGERIA.

HE is a business man, He is the Chairman of Akhigbe Osi Industries Limited, Akhis Oil and Gas Limited and Patrajos Global Company Limited, with a subsidiary in car hire services (CITY TRAVELS AND TOURS) aka CITY CARS.

He was appointed Senior Special Assistant on Protocol matters to the Governor in 2008 by the Comrade Governor, a position he held for 4 years. He was further elevated owing to his dedication and responsiveness to duties as the EXECUTIVE DIRECTOR ON PROTOCOL MATTERS to Governor Adams Aliu Oshiomhole.

He has served in various committees set by the State Government and he discharged his responsibility very well to the admiration of others.

Borehole in my house, reticulated on the major road of 650 metres.

Supplying of diesel to some of the boreholes in fugar.

Reticulation of the water in IVHIOKHILE Quarters.

Reticulation of the water in IVIOKPO Quarters.

Construction of 650 meters OKIKI street with both side drains and asphalting (near completion).

Transfer of the 250KVA transformer from IVIADOKO Quarter to IVIUKASA Quarters.

Construction of a block of 3 classroom and staff office in Central college OGOCHI EKPERI.

Construction of ARUA SECULAR Road (NDDC)> this was influenced by JOHN AKHIGBE through the then commissioner Late DON.