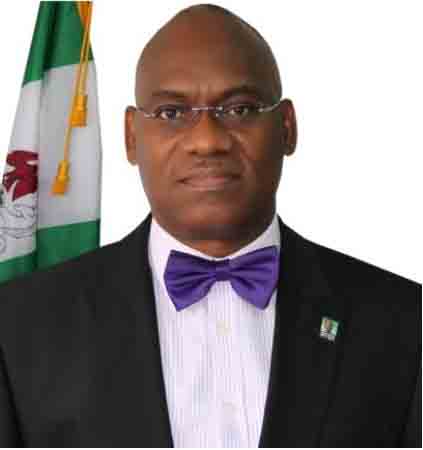 Born 24th March 1959, Oseni Salawe Elamah, mni had his National Diploma in Accountancy from the prestigious Federal Polytechnic, Auchi. He proceeded to do a Masters in Liverpool John Moores University, United Kingdom where he was awarded a Masters in Corporate Governance and Finance with a Research Project on corporate governance in quoted companies.

He cut his teeth professionally as an Auditor and a Chartered Accountant with S. S. Afemikhe & Co, from where he proceeded to Geomsaf Group Limited as Financial Controller. Over the years, he was at various times Director of Finance and Administration (Sheltercare Mortgage Finance  Ltd),  Executive  Director  of  Finance  and  Administration  (TRW  Stockbrokers Limited), Managing Partner (Patriot Consultants), Executive Director, Business Development and Logistics (Hoslyn Oil and Gas Services Ltd). He was also Executive Director of Business Development (Multinational Expertise Ltd) where under the mentorship of the Late Chief Aret Adams, he was responsible for strategic planning and development of new business lines one of which was Multinational Craig Energy Services a Joint Venture Company with a UK Energy Supply Group where he became the pioneer MD/CEO.

During his stint as Executive Director of Nigeria Social Insurance Trust Fund (2002-2005), he was part of the team that designed and implemented a robust investment policy guideline that grew investment assets by a factor of over 400% within three years and was a major institutional investor in the Nigerian Capital Market, holding an average of 10% equity share of the quoted companies on the Nigeria Stock Exchange (NSE).

As pioneer Managing Director/CEO, Trust Fund Pensions PLC (2006-2008), he established the company as a leader in the emerging pension industry in Nigeria. His tenure at TrustFund Pensions PLC not only created a solid foundation for the growth of the company but led to the growth of pension assets to over N120 billion. A member of the Council of the NSE (2003-2006), he served on the Committee that drew up the corporate governance code for the Securities and Exchange Commission (SEC). He has also been Directors at various times for Central Securities Clearing System (2002-2007), Profund Securities (2002-2007), Crusader Insurance  (2002-2005),  Gaslink  Nigeria  Limited  (1999-2005),  Multinational  Expertise Limited (1999-2002), Multinational Craig Energy Services Limited (2003-2008).

Oseni Elamah has also made his mark in the public sector. Between 1998-1999 he was Special Assistant to the Head of State in the Office of the Special Adviser (Chief Aret Adams) to the President (Petroleum); and from heading the Edo State Asset Verification Committee at the  inception  of  Comrade  Adams  Oshiomhole’s  administration  in  2009,  he  became  the Special Adviser to the Governor on Fiscal Governance and Project Monitoring. He was also the Executive Chairman of Edo State Board of Internal Revenue, between 2011 and 2017 where he was instrumental to the consolidation of tax administration reforms in Edo State culminating in the granting of full autonomy for the Edo State Internal Revenue Service in October 2015. His tenure saw a growth in internally generated revenue (IGR) of over  above 560% (it grew from N300m to N2bn/month during my stewardship), with the landmark figure of N2 billion monthly IGR collection exceeded for the first time.

He was appointed the first Executive Secretary of the Joint Tax Board (JTB) in 2017, a position he held until 2020.

He is married with children.