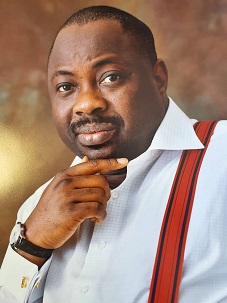 Chief Dele Momodu, born May 16, 1960, in the ancient town of Ile-Ife, Nigeria, is an African Journalist of high repute and loud acclaim; he is a Publisher, polemicist, businessman, philanthropist, actor, politician and motivational speaker. He is the CEO and Publisher of Ovation International, a magazine that has given publicity to people from all over the world in over 60 countries. He is the Chairman of the Ovation Media Group, comprising of Ovation International magazine, Ovation Television and The Boss newspaper. His media empire has worked assiduously to change the negative perception of Africa as a dark continent of vampires. He is one of the most prolific essayists in Africa and he has authored and published several books in his name. He is one of the biggest voices on the African social media platforms and his Twitter account is already approaching a million followers. He is one of the most photographed celebrities in Africa. Chief Momodu has met and interacted with world leaders. He has received innumerable awards and honours, and garnered recognition for his work in the world of business, politics, literature, music and fashion in which he plays major roles. He has bagged two Doctorates (honoris causa) from Universities in Benin Republic and Ghana. He is a recipient of multiple traditional titles in Nigeria and Liberia.

Chief Momodu writes a weekly and very popular column, called Pendulum, on the back page of Thisday, Nigeria’s most influential newspaper, every Saturday.

Chief Momodu is a graduate of the great University of Ife, (now Obafemi Awolowo University , Ile-Ife). He holds a Bachelor’s degree in Yoruba language (1982) and a Master’s degree in English Literature, 1988, from the same University (the first Nigerian ever to attempt such a combination). He has been a political activist for decades and was forced into exile in Great Britain from 1995-98 under the military rule of General Sani Abacha.

Chief Momodu announced his intention to run for the Presidential election in his homeland Nigeria, in 2011 but lost.

Chief Momodu is married with children.